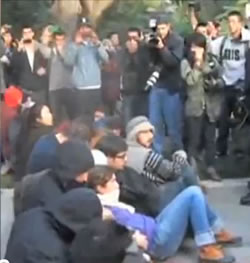 Here is a video that came out today of students who started an occupy movement at the University of California.  This has angered many people because they appear to be passive about their demonstration.

The president of the University of California system said he was “appalled” at images of protesters being doused with pepper spray and plans an assessment of law enforcement procedures on all 10 campuses, as the police chief and two officers were placed on administrative leave.

Here’s my take on the situation: Obviously the protestors were passive, but how else do you to stop protesters from disrupting a university or public place.  If you try to stop them and make them leave passively they wouldn’t listen anyway.  So what would the next step be if they don’t leave?  Do you feel bad for these kids who were clearly not listening to the cops when they told them to leave?

the police were in the legal right to do this. the protesters were not passive in any way, they physically resisted .They had a choice to move, if they moved they would not get sprayed.