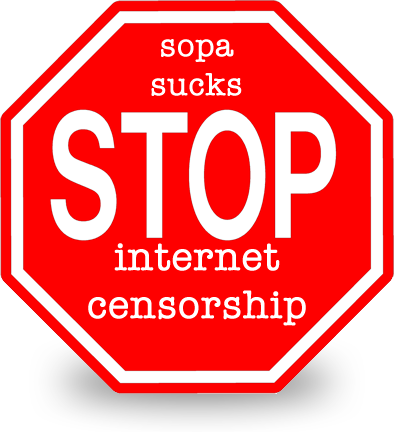 SOPA stands for the Stop Online Piracy Act. It is one of two bills being considered by congress today. The other is theProtect-IP Act.  They are well-intentioned. They want to prevent piracy and copyright infringement. But they do so in an overly-aggressive, innovation-endangering way. They allow the entertainment industry to censor sites they feel “engage in, enable or facilitate” infringement.

SOPA is a very scary thought for many of us who own websites or are in the website industry.  Heck, it even infuriates general internet users who simply browse casually for news and use Facebook.  For me, this stop online piracy act is absolutely ridiculous.  First, they will never stop it completely no matter how hard they try.  Piracy will always exist.  Second, they are going to anger A LOT of smart security geeks who will start hacking the crap out of the agency’s trying to stop websites.  There will also start to be a lot of underground or private website’s around that I’m sure will find a SOPA loophole.
Help make an effort by signing up with Mozilla’s effort to stop SOPA.  As a large internet community we have the right to our internet freedom.  Mozilla’s efforts were noticed on their Google homepage, the standard homepage for Firefox user’s.

Right now, the U.S. Congress is considering legislation that could profoundly affect the future of the internet. It’s called the Stop Online Piracy Act.

The fact is that this legislation as written won’t stop piracy. But it would pose a serious threat to social media and user generated content sites (like YouTube) across the internet. It could also undermine some of the core technical systems underlying the internet, creating new cybersecurity risks.

As a non-profit committed to keeping the web open and accessible to all, Mozilla wants to ensure that this legislation does not jeopardize the foundational structure of the Internet.

1) Earlier this week, we wrote a joint letter with Facebook, Google, Twitter, eBay, Yahoo! and other technology companies publicly opposing this legislation — and placed ads in various influential newspapers across the country.

2) We also joined other organizations in a day of action on November 16th — when hearings were being held in the U.S. House — to draw attention to the issue and get people to contact their representatives.

But these are only the first steps toward ensuring that the proposed legislation does not pass as currently written.

If you’d like to get involved, please sign up using the form on the right. We’ll be in touch with ways to help in this campaign along with our other efforts to defend and improve the Web.

If you are not in the U.S., please pass this page along to anyone you know in the States — and I’d encourage you to sign up anyway, to stay informed about what we’re up to.