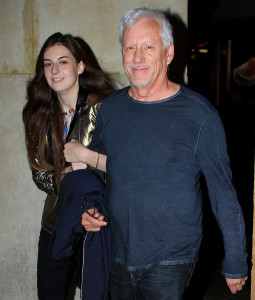 Actor James Woods is on a high roll with his sweet new girlfriend Kristen Bauguess. She is just 20 years in age when he has turned 66. Certainly James Woods is in a flaunting mood and took her to the red carpet recently. Kristen joined hands with his new almost father like aged boyfriend to the premiere of his movie “White House Down”. The newly formed couple where age is not just a number but a huge number gap of 46 years surely made many jaws drop at the movie premiere. Media could not stop clicking on the famous actor Mr. Woods with his shiny new and little girlfriend walking down the red carpet.

It has been in reports that in April, James Woods left his previous 26 years old girlfriend Ashley Madison. Undoubtedly he had been acquiring feelings for present James Woods girlfriend Kristen which lead him to split with his past seven year relationship. He started dating Miss Madison when she was nineteen and indeed he knew his loyalty intentions which is why did not marry her even after seven years. Kristen Bauguess had been arrested for felony drug charges before she got in terms with James Woods. Controversies are spread all around about her real attraction for a man thrice her age or she is using him for his money.

Although both have them preferred to stay shut when asked about how long they have been dating each other. It is quite clear that Woods has got a special affection for the late teenage girls and he enjoys spending a lifetime without the burden of marriage. Calling quits with his previous relationship was a sudden and underground act which came out only when he debuted his new relationship at the premiere of “White House Down”. There still remains a huge question as to why Kristen is risking her life with the 66 year old actor. Can money actually buy love?

He really needs to find a woman and stop dating girls/child he could very well be his granddaughter.. So disgusting!!!!

Good on him. Who says you have to be certain ages to date – it’s no one else’s business.