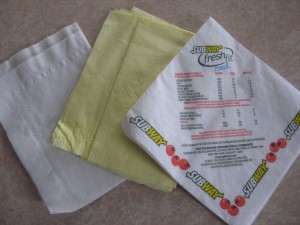 A man is suing McDonalds $1.5 million dollars over a couple of napkins.

Webster Lucas was unhappy with his local McDonald’s in Pacoima, CA after he received just one napkin. When he asked for more, Lucas claims he was denied. That did not sit well with Lucas, who told the manager on duty, “I should have went to eat at the Jack-in-the-Box because I didn’t come here to argue over napkins. I came here to eat.” According to Lucas, who is African American, the manager then made a racially-motivated remark, allegedly saying something about “you people.” (The manager is reportedly Latino.)

Is this guy serious?  He really thinks he has a case here?  What is this world coming to?  How could this even come across someones mind?