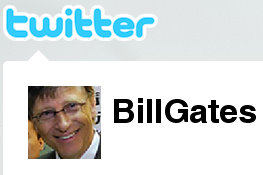 Bill Gates, the founder of Microsoft and currently the world’s richest man, has officially joined Twitter!  You can follow him here @billgates .  His account is verified already, and he’s even received a warm welcome from the king of Twitter himself Ashton Kutcher (@aplusk).  And about an hour ago, Bill Gates then retweeted back to Ashton Kutcher (see retweet here).

Here are some impressive Twitter follower numbers for you – and keep in mind, Bill Gates joined Twitter only about 6 hours ago, according to his first tweet.

I’m sitting here hitting F5 on my screen while watching Bill Gates’ Twitter profile, and each time I hit F5 to refresh, his follower count increases anywhere from 10 – 20 followers – that’s about every 2 seconds.