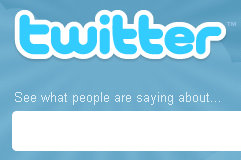 **TAKE NOTE** Do this for me, if you log out of your Twitter profile and then go to Twitter.com, on the homepage of Twitter, right above the search bar, you’ll see the words “See what people are saying about…” – you need to realize that with Twitter, EVERYONE can see what EVERYONE ELSE is “saying”!  A man in the UK realized this the hard way when he jokingly tweeted about blowing up an airport after it was closed for inclement weather.

According to the IndependantUK, when heavy snowfall threatened to scupper Paul Chambers’s travel plans, he decided to vent his frustrations on Twitter by tapping out a comment to amuse his friends. “Robin Hood airport is closed,” he wrote. “You’ve got a week and a bit to get your shit together, otherwise I’m blowing the airport sky high!!”

So yeah, you might not want to get on Twitter and write about blowing up airports.  Just the mention of those words on Twitter, or any other social network, will put you under the jurisdiction of “terrorist threat”, and you will soon be getting a lot of attention from the Feds.