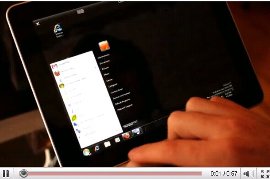 How can this be? I just found a video that appears to be running Windows 7 on the iPad?

But from the looks of the video below, this is clearly an iPad running Windows 7.

So is the Windows 7 running on the iPad a hack?

Surprising, what you you see running on the iPad is a VNC client that’s connected to a nearby MacBook, which enables the iPad to emulate Windows 7. The good news is that this requires little to no hacking expertise in order to get it working, but the bad news is that it’s not a native operating system installation, so it won’t work by itself with a MacBook alongside of it, according to hothardware.com.

Check out the video elow of the iPad running Windows 7: