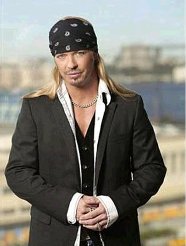 Late Thursday night, Bret Michaels experienced excruciating headaches and was rushed off to the hospital where he was immediately admitted to the Intensive Care Unit. Bret Michaels was diagnosed with having a Subarachnoid Hemorrhage (or brain hemorrhage) and he was listed in critical condition.

The latest reports I’ve been able to read give us better news than many people would have expected at this point.

According to MTV.com, TMZ is reporting that Michaels is “awake, in good spirits and talking” as of Friday evening (April 23). This information comes from Ambre Lake, the season-two winner of Michaels’ “Rock of Love” reality show. MTV.com is also stating that Lake has spoken with people close to Bret who say he’s “stabilized and conscious.”

Lake’s status update on the 47-year-old hair-metal legend is said to coincide with another unidentified “Rock of Love” contestant who is in touch with the other members of Poison.

Sources have told People Magazine that, “After several CAT scans, MRIs and an angiogram, [doctors] decided to keep Michaels in the ICU and are running several tests to determine the cause [of the hemorrhage],” the source told People. “[It] will be touch and go for the next few days while he is under intense observation.”

Considering that Bret Michaels experienced a massive brain hemorrhage, it is really great news to hear that he is “awake, in good spirits, and talking…” this is a very good report to hear, and it also shows that extensive brain damage did not occur during the hemorrhage.

I hope that he is able to recover fully from this health crisis.