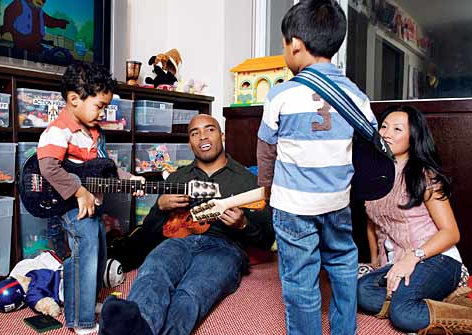 There are new updates hitting the web today that Tiki Barbers wife – who is pregnant with Tiki Barber’s twins – has officially filed for divorce in divorce in Manhattan Supreme Court, citing “adultery.”

Despite rumors that Tiki Barber has been fired from NBC, along with the reports about Ginny Barber filing for divorce are reports that NBC is not going to fire Tiki Barber and they will keep him in place at his supposedly high paying job.

Meanwhile, hanging out in the wings of all this train wreck is Traci Lynn Johnson – an NBC intern who became Tiki Barber’s mistress.

I don’t really know what to say about her because she isn’t really part of the conversation or the news that is happening today. Other than, Traci Lynn Johnson is the woman behind the Tiki Barber and Ginny Barber divorce.

According to Ginny Barber, who is confined to her bed in her apartment, while Tiki is out and around town with his mistress, “There have not been any complications, but her doctor said it’s safer for her to stay in her home and stay in her bed,” said a source close to the matter. She’s a small woman and she’s very pregnant. Aside from visits to her doctor, she’s confined to her apartment.”

According to a source close to Ginny Barber, “All she wants to do is make sure her kids are taken care of… Suffice it to say she wouldn’t have had to file for divorce if the negotiations had produced an agreement.”

So what are your thoughts about this whole Tiki Barber, mistress Traci Lynn Johnson, and now Ginny Barber filing for divorce?

I think it is absolutely ridiculous that he is out running around with a two bit w****e while his wife is confined to her bed. He should be man enough to step up and take care of things while she is on bed rest. He is after all the one who helped put her in that condition. Tiki step up and be a man. If you think your little hot blonde bombshell is going to stay with you… you are totally insane. I understand things happen and couples split up but you've been with your wife for 11 years and 2 kids with 2 more on the way. I have lost all respect for you as a person for not taking responsibility for your family. You could at least wait until she gave birth and was back on her feet before you pulled the rug out from under her you piece of crap!

Tikis wife married Tiki for his popularity and money ! this is what you get when money and greed are the forefront of a marriage. These kind of people will never learn, and need to feel the pain in order to make a better educated decision in the future. I feel bad for the kids, all wound up in there parents silly greed for money and lust.