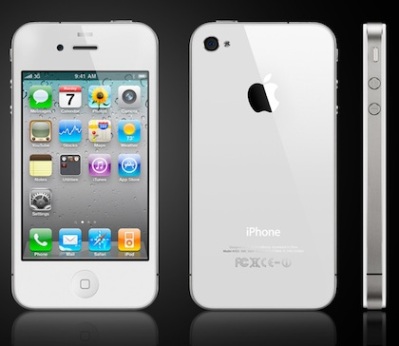 The white iPhone 4 might not be available until August, according to a customer who visited a Best Buy to pre order an iPhone 4.

White iPhone 4 Not Available Until August

Someone posted a comment here at Social Media SEO stating that he just left a Best Buy store after pre ordering his iPhone 4, and he said that the rep at Best Buy said the white iPhone 4 will be available until August.

So does anyone have any additional info regarding the white iPhone 4?

Best Buy is definitely not a primary source for that type of information. I was able to preorder a white iPhone yesterday with them shortly before the company ceased orders for those models, and the gentleman I worked with told me that they are expecting a small supply of the white ones to come in a few days after the 24th of June. Until Apple officially releases more information, what the people at Best Buy say is solely based on rumors and opinions.

So you're saying BestBuy is getting White 4's before Apple is? I find this very hard to believe. If "what the people at Best Buy say is solely based on rumors and opinions" than how would you believe that they were getting shipped White 4's? I suspect you'll get a letter in the mail or a phone call from a BestBuy rep regretting to inform your order won't come on time.

Read what they're saying dumdum; Mallory's point is that Best Buy is definitely not a primary source as there have been differing statements made by the people that work there. "Until Apple officially releases more information, what the people at Best Buy say is solely based on rumors and opinions."

Thank you, mininuke. Thanks for the condescending reply Ismael, but all you needed to do was read my statement below… I don't believe they're getting the white iPhone 4's…but I went ahead and preordered one anyway– if Apple surprises us, and I'll be first in line to get it.

i agree that i wouldn't trust bestbuy, but i also heard from someone who talked to an apple rep that they wouldn't be available until august….idk if it's true of not, but i figured i would throw that out there…

I wish they would have told us. I know plenty of people who sold their iPhones prior to the Pre-sale date, even saved their upgrades. Now we'll have to wait even longer. What fun..

BEST BUY DOES NOT KNOW. This is a rumor simply started by some kid who made a date up. He most likely saw the AT&T email on the internet stating a "later this summer" release and conjured up a date. Please disregard this articles mention of a "possible august release" as no one knows but Apple. Obviously.

andy- you're hilarious! BUT SO RIGHT! OMFG- I had been trying since 8am CST yesterday until 8pm that night to order online!!!! STEWPID APPLE! They should have prepared better and KNOWN what we would have wanted!!!!!!! SO MAD that there's only fr!cken black ones. UGH!

Whoever wrote this, 'Article', better go back to school. Your spelling is appalling.

This sucks! Everyone I know has sold their Iphone for this one! I sold mine and I miss it!

no one is taking orders for the white one not even at the apple store, if you pre order a phone you are getting a black one

Sadly…I'm living on a blackberry curve for now until the white comes. I gave mine to my husband so he'd have an iphone so he would get the unlimited data plan. Hopefully his pre order black 32 gb from Best Buy is honored…me? Well, I suppose I'll use my 3GS until the white comes in since we pre ordered from Best Buy as well. All I know is I need some kind of iPhone…life without one sucks! I do not like this crapberry. Anyhow…at the best buy we went to they told us they'd have a limited stock for those who did pre order. We made number 5 on the list. It's all speculation now, we won't know anything until next week. Fingers crossed for everyone!

Here in the UK I phone my local O2 store and the main head quarters, both 100% said that that O2 would have the white iPhone 4 on the 24th June, and also the guy at HQ new what was going on at apple, how you can't pre order online, how the ship date has now changed in the UK and he also claimed there will be a 3rd iPhone 4, a multi coloured one ? But I think he may be on about the bumpers.

I want the whit one so bad, as i'm sure many people do too. Who would of thought they would only have black ones.

An associate at an Apple store told me white iPhone 4's aren't expected to be available until sometime "this fall". Call an Apple store and see what they say.

i just got back from the apple and at&t store… I talked to the manager and he said they will not have any of the new white iphones the 24th…when i asked when he would get any he said that he had been told he would get a shipment the end of july! stupid that they cant just have them the day the iphone comes out!?

friend of mine just ordered at an AT&T store (Austin). He ordered the black and was told he could exchange it with a white when they come in.

@card, yeah they'll agree to exchange it but only for 30 days. if the white one does not come out in 1month, then your friend is stuck with black

Leo, I was able to put in a preorder for the white one….but it's all up in the air right now. Best Buy said they are waiting to see what happens and if anything, they'll let me snag a black one if I want to change it. I just want the white one so freakin' bad with the cute pink bumper…*sigh*

I spoke to someone at both the apple 800 number and an apple retail store and they confirmed that white iPhones will be available on a first come first serve basis ON June 24th, no preorder

My number? Why on earth would you want that?

AT&T told me that the white iphone 4 will not be released until later in the summer.

This is all just too funny. I cant believe all of the mix information. I was the first person to pre-order two white iphone’s from best buy on June 15th. After I saw all of the information of no one getting them, I called back sooo many times, i spoke to the store manager and the mobile dept manager and geeksquad. All of them confirmed that they do have a small shipment of white iphones that will be at the store on the 24th here in Maryland. I called today acting as someone else and got the same answer. They said the stopped the preorders on the white ones because they only have a small limited amount according to their inventory. The manager stated she cannot speak for any other retailor but according to her shipment and corporate they will have a limited amount. I hope I do not get the dreaded phone call back to change. Right now my best buy here in Maryland will get a small amount on the 24th

I hope this is similar to what Radioshack is doing because I did the exact same thing with my local radioshack and I received the same answer that your best buy was giving.

well i went to best buy on the 15 out of couriosity . and asked they told me that they were gonna have the white iphone so i preorded mine. later that day my cousin went and preordered his(like 2 hours ago) n preordered his. come to find out they called him today and told himthey were sold out of white iphones. i havent got a call yet so hopefully i will be gettin mines next week

Brandon, I'm in VA and I was told the same thing. I was the 3rd person to order the white 32 gig, and they said they stopped preordering them shortly after I went in for mine since they are over the limit of the small shipment. PRAY FOR US!!!

I went to Radioshack and pre-ordered a white iphone 4 32 gig… The white 16gig was already sold out when I entered the store, and the store manager had an updating email telling her how many iphone 4’s were available. There were about 26 white 32G iphone 4s available when finally the request radioshack was sending to apple came through for us and reserved the phone. Hopefully this means I can pick up a white 32 gig iphone 4 at radioshack on the 24th if not very soon thereafter .

I was the first to preorder a white iPhone at my Best Buy. Later the same evening I was called and told BB corporate emailed BB mobile and informed them there will be no white iPhones until august. This is in PA.

The fun part was I told the store manager that even Apple said no white iPhones available for preorder but BB gladly took my money anyway. At least I’m first on the list. =)

and fyi there is no 16 gig white iphone 4 billie.

I had ordered white iphone 4 at best buy. Today best buy called and asked me to switch to black because white won’t come until mid august.

I talked to Apple on the phone and they said they would have some white iPhones on launch day.

Why does everyone suddenly want a white iPhone? When the white 3G came out they couldn't give them away.

I was first in line at my local best buy, and ordered my 16 gig white iphone 4. noticed all the things online about it not being available so I called them, I still get mine the 24 apparently…(not getting hopes up). Maybe specific best buys only get some of the white ones? based on prev iphone sales or something? idk im just hoping for the best, because I sold my white 3gs and am using a pink freggin sony ericsson…great.

I work for AT&T at 1 of 2 Mobility Distribution Centers here in the US. I know for a fact our two warehouses ship to all of the national retailers (Best Buy, Walmart, Radio Shack) and AT&T stores. We are the sole distributors in the supply chain for every store that sells the iPhone, besides Apple's own retail stores. There are zero white models in our future receipts at the moment. Also all of our iPhone 4 inventory has been pre ordered. All of it. That means that every phone we have in stock is already sold (We began receiving the phone on Thursday). That means that if you didn't pre order, there is no extra inventory being delievered to any of the national retailers or AT&T stores, so you better get in line at the apple store for their limited supply.

I called the Apple store in Raleigh, NC yesterday (20 August), and they said that the white iPhone 4 won’t be out until “later this year.”
So I guess that’s a wrap on the mid-August date that everyone’s been getting.