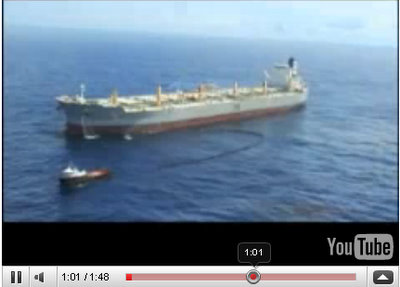 After testing the Gulf waters over a week ago, the massive oil skimming vessel call A Whale Skimmer has been given one more week to test the effectiveness of it’s oil skimming capabilities.

Previous tests of the A Whale Skimmer were proven to be “inconclusive” after the ship was unable to take in and process the oil contaminated water effectively. The main reason being that the slots on the sides of the A Whale vessel are too thin to capture oil from the choppy waters in the Gulf of Mexico.

TMT, who owns the massive skimming ship, released a statement saying they are confident that “ongoing modifications will improve the skimmer’s performance.”

TMT has spent millions of dollars of their own money on the A Whale vessel and the testing procedures up to this point and will only receive an oil skimming contract if the vessel can prove to be effective.

I would say that with the A Whale Skimmer, it’s time to either perform as expected, or pack it up and head on back to Taiwan.

Here’s an ariel view video of the A Whale Skimmer testing the Gulf waters: