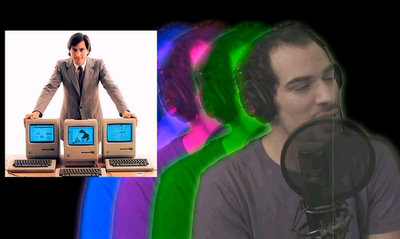 I would classify writing a song that compares Steve Jobs to Moses as an extreme expression of fanboy’dom.

That’s exactly what Jonathan Mann did – he wrote an entire song about Steve Jobs.

And here are the lyrics for The Steve Jobs Song:

his violent temper, his strict beliefs
his singular vision make him adored
we try our best as we make our way
through the pipeline of products we can’t afford
in his guarded temple there’s a beating drum
and it’s made of glass and of aluminum
on every surface a mysterious brew
a reflection of desire is forged anew