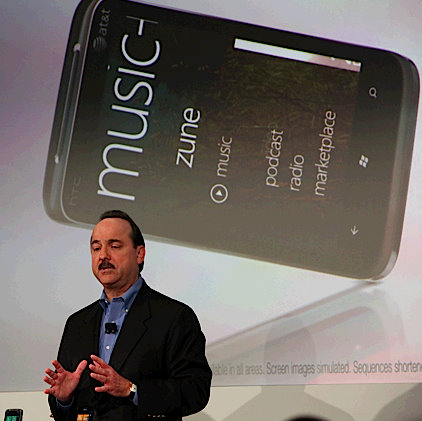 The Windows Phone 7 conference is setting a pretty fast timeline for when the new mobile phones will hit AT&T. Ralph de la Vega (CEO of AT&T) has just stated that 3 Windows Phone 7 devices will be hitting the shelves at AT&T on November 8th. Steve Ballmer also just announced that Microsoft will be launching 9 phones in the U.S. when the phone ships in November.

No word yet on a Windows Phone 7 tablet pc, but then again the conference has only just begun.

AT&T CEO also announced that AT&T U-Verse TV will be coming to the Windows Phone 7 smartphones. You’ll be able to watch shows like Mad Men on your mobile.

Non-AT&T U-Verse customers will be able to get the service as well for a small monthly fee – the amount is not yet known.