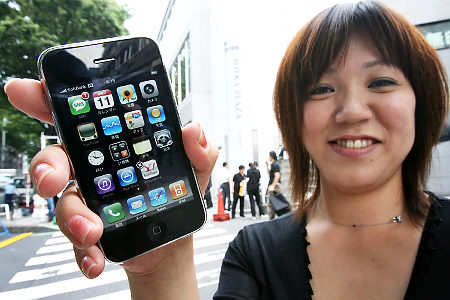 When it comes to the iPhone app market, there are some things that are good to know if you are a developer looking to succeed in this space. There are some places where the app market is saturated, like in the US.

And when I saturated, I mean simply a comparative amount of app usage compared to other locations.

But Japan could be the place where, as an app developer, you can have the most potential for getting noticed.

The Japanese cell phone market used to be an “isolated island”. Cell phones ran on a network that was not found anywhere else in the world, and cell phones were filled with games that were tailored to the Japanese lifestyle.

But the iPhone is changing all of that.

The iPhone now dominates that Japanese mobile market, something that app developers are quickly taking notice of and building apps to tailor to the culture.

“Japanese are well-educated. They will pay for applications,” said Brian Lee, a manager at Taiwan-based Penpower Inc., which sells an app for digitally organizing business cards. “A lot of developers are coming into this market.”