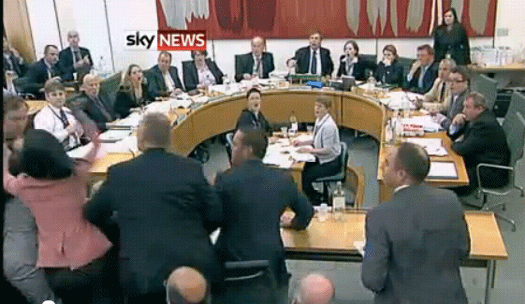 According to the WSJ, Ms. Murdoch leapt into action when a self-proclaimed comedian and anarchist lunged at Mr. Murdoch—who was testifying with his son James, in defense of News Corp.’s handling of its tabloid newspaper scandal—with a plate of foam. Ms. Murdoch sprang at the man, hitting him with an open-palm slap. The move prompted the U.K. media to dub her “heroine of the hour” and elicited compliments from members of Parliament, one of whom said to Mr. Murdoch when the hearing re-started: “Your wife has a very good left hook.”

Here’s the video of Rupert Murdoch being attacked: