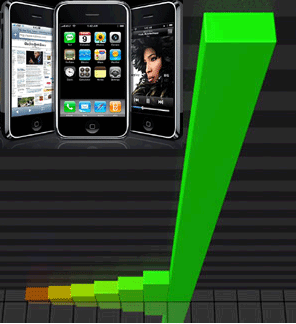 From a smartphone marketshare standpoint, we all know by now that Android OS has the dominant position over Apple.

The strategy from Android is simple, build an OS (operating system), and then let multiple smartphone manufacturers adopt.

Apple, on the other hand, takes a more centric approach to design and integration by releasing and focusing on just one operating system – iOS.

Apple will simply update the iOS with new releases without ever compromising the structural operation of the iOS.

The strategies from both companies are heavily debated as to which one is better.  But one thing is certain, the Apple iPhone is exploding ahead of all other smartphones in terms of global shipments.

Worldwide Mobile Phone Market Grew More Than 11% in the Second Quarter; Feature Phones Decline for First Time in Almost 2 Years, According to IDC

The feature phone market shrank 4% in 2Q11 when compared to 2Q10. The decline in shipments was most prominent in economically mature regions, such as the United States, Japan, and Western Europe, as users rapidly transition to smartphones. This was the first decline since Q3 2009 and reflected a combination of conservative spending and continued shift to smartphones.

“The shrinking feature phone market is having the greatest impact on some of the world’s largest suppliers of mobile phones,” said Kevin Restivo, senior research analyst with IDC’s Worldwide Mobile Phone Tracker. “Stalwarts such as Nokia are losing share in the feature phone category to low-cost suppliers such as Micromax, TCL-Alcatel, and Huawei.”

“For the overall market to grow by double digits year over year, despite the decline in feature phones, is testament to the strength of the global smartphone market,” noted Ramon Llamas, senior research analyst with IDC’s Mobile Phone Technology and Trends team. “While this is not a new trend – smartphones have been the primary engine of growth for the last several quarters – it does mark something of a transition point, as demonstrated by the growing number and variety of smartphones featured in the vendors’ portfolios.”

The feature phone forecast isn’t expected to be any rosier in the quarters and years to come. Shipment growth of the device type won’t exceed 1.1% in any year forecasted by IDC.

Nokia’s hold on the top global mobile phone spot weakened last quarter as inventory buildups in traditional strongholds, namely China and Europe, led to sharp year-over-year shipment declines. Nokia’s global feature phone and smartphone businesses suffered a similar fate. One positive sign for Nokia last quarter were dual-SIM devices; the company shipped over 2.6 million of these in the second quarter. Over the long term, Nokia’s smartphone fortunes will be dictated by its ability to sell Windows Phone 7 smartphone devices, which are expected to hit the market this year. It is Nokia’s primary smartphone platform of the future. In the meantime, Nokia is trying to sustain shipment volume with low-cost mobile phones and devices powered by the aging Symbian smartphone platform.

Samsung posted double-digit growth from the same quarter a year ago, and just slightly slower growth than the overall pace of the market. Like other vendors it realized a decrease in demand for its feature phones, but made up the difference with continued success for its Android-based Galaxy smartphones. The difference between Samsung and market leader Nokia continued to shrink, with less than 20 million units separating the two vendors, mostly resulting from Nokia’s struggles in the market. Still, Samsung expects continued growth into the second half, which could put it in closer contention with Nokia.

LG Electronics held on to its number three position during the quarter, thanks in part to its Optimus smartphone sales worldwide. However, a combination of factors – including soft demand for its feature phones, slow pace of smartphone releases, and competitive pressures, led the company to downgrade its outlook for the year by 24%. Originally, LG had anticipated flat growth in 2011 from 2010 levels, even as it expected the overall market to increase by 8%. Should LG’s volumes decrease as much as it anticipates, other vendors may jockey for position ahead of LG.

Apple maintained its number four position overall but closed the gap on Top 5 competitors thanks to another record unit shipment quarter. The company easily posted the highest growth rate of the worldwide leaders despite the fact that its flagship iPhone 4 is now more than a year old. The triple-digit shipment volume growth allowed Apple to more than double its share when compared to the same quarter last year. Apple’s ability to bring its smartphone momentum to developing economies, where it’s less successful, will help dictate the company’s smartphone fortunes in future.

ZTE likewise improved volumes and picked up market share during the quarter, enough to maintain the number five position. Long known as a purveyor of simple, voice-centric mobile phones, ZTE has stepped up its smartphone game with the continued success of its Android-powered Blade and Racer smartphones while announcing Libra, Skate, and Amigo smartphones for release in the second half of this year. Feature phones continued to be popular for ZTE, with the release of its 547i, a social networking-centric device in Europe.