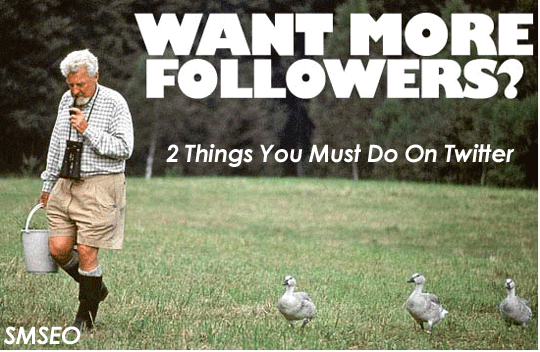 Twitter sometimes gets a bad rap because of it’s lack of “social finesse” that is found on other social networks like Facebook.  You see, on Twitter, the primary action taken by someone is outbound broadcasting – I send out some bits of information with the hopes of you liking it, and with the hopes of it generating more followers.

So that’s why millions of people join Twitter and try to become an overnight sensation with just a few bits of news updates.  Unfortunately, as you might already know, that just doesn’t cut it.

However, figuring out a way to generate a lot of followers can really pay off, especially if the followers are people who are following you specifically for your products or services.

So what does cut it?  How can someone (an individual or business) experience explosive growth on Twitter?

Let me share with you two tips that are an absolute necessity if you are going to experience explosive growth in Twitter followers.

In fact, if you get these two things right, then not only will you grow your Twitter followers, but you could quite possibly become the next overnight sensation on Twitter.

1)  Doing something dramatic that creates a buzz

Hmmm…. that might be tough one because what are you going to do that might be considered dramatic, and that will also create a huge buzz?

Consider this in your brainstorming sessions – Twitter now allows images to be shared.  So why not put together some dramatic, or controversial, or extreme, or all of the above, images to share on Twitter?

What that looks like for you exactly, I’m not sure.  I do know that sharing an image – especially if it’s a dramatic image – is a sure fire way to creating a buzz on Twitter.  People love imagery on the web, and extreme photos always create a buzz.

The trick is to figuring out the best image to use.  Heck, the image doesn’t even have to be directly related to your business.  Just any extreme, extravagant, or over the top imagery will do… trust me!

2)  Be responsive to followers

Now that you’ve shared an extreme image on Twitter and it has everyone buzzing and your followers are growing exponentially, the next best thing for you to do is to respond to all of those incoming messages.

Being responsive and active on Twitter tells everyone following you that you are an actual person who appreciates their fan base.

Leave replies, @ messages, and more in order to let your fan base know that you are for real, and that you really appreciate those who are following you on Twitter.

Build up your following of true fans, fans that look forward to engaging and interacting with you, and then you’ll understand the value in having a high quality following on Twitter.