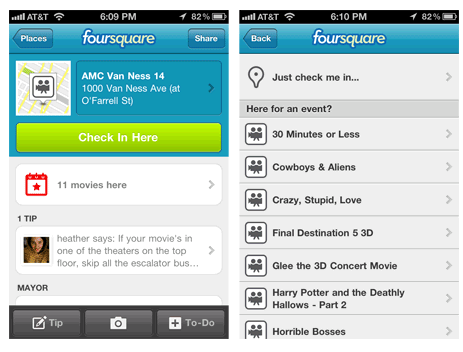 Foursquare announced today a hot new feature that takes the world of “checking in” to a whole new level.  Now you’ll be able to check in to actual events that are happening, instead of just checking into a single place.

As a way to deliver a more robust experience, Foursquare has partnered with ESPN, MovieTickets.com, and Songkick.  This partnership brings in thousands of events from over 50,000 venues into the Foursquare database, allowing you to checkin to the location, and to the event itself, at just about every major event happening in the United States.

The added feature is sure to be a hit with users.  Now you can not only see where your friends have been, or where they are currently checking into.  But now you’ll able to double check your friend’s stats on whether or not he actually attended the Lakers’ game last night or not!

According to Jenna Wortham from the NYTimes, Foursquare says “the new features will simply formalize the standard behavior of its users. It’s quite common for those using the service to announce what they’re doing when they check in at a place.”

Taking a quick read through the comments on the Foursquare announcement, it looks like fans are excited about the new addition of events.  The true test is going to be in the analysis of adoption, and whether or not Foursquare users are actually checking in to these events.  Beyond that, the “cool” factor will come from when your friends are now responding to you checking in to a certain event.

This begs the question of course, what will Facebook do about this feature?

With Facebook Places having “check ins” as the cornerstone to their application, here we have what looks like Foursquare “one upping” Facebook at the features level.  It wouldn’t surprise me one bit to see an equivalent update coming from Facebook in the very near future.