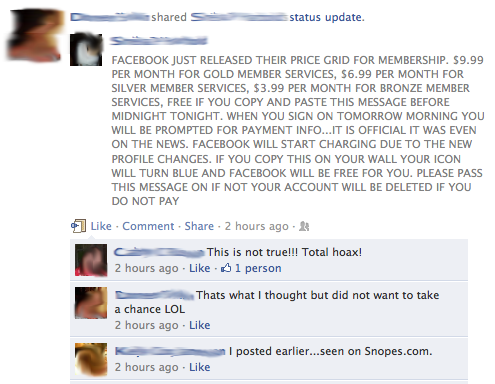 Will Facebook charge user’s in 2011?  This sounds like a crazy thought, and you have probably come across a strange post from someone you know on Facebook saying that they are going to charge users in 2011 for having a Facebook account.  This news popped up after the Facebook’s recent layout changes, including a mini-feed, top stories section, and recent stories section.  The fact that anyone would even consider this claim to be true is quite ridiculous.  From a logical standpoint, why would Facebook charge you when they made an average net profit of $83 million the first half of 2011?  There’s no need for them to anger their user’s and lose them.  Nothing to worry about, Facebook officially said they were NOT going to charge users.

One Facebook group, “300,000 MEMBERS NEEDED TO STOP FACEBOOK FROM CHARGING £/$14.99 A MONTH”, has successfully attracted over 474,000 users. Another group claims Facebook will begin charging on July 1st, but it’s a flat out lie used as a way to drive thousands of users to the group.

After browsing Mashable, I thought one of their user comments were pretty hilarious. Take a look at this one comment below: