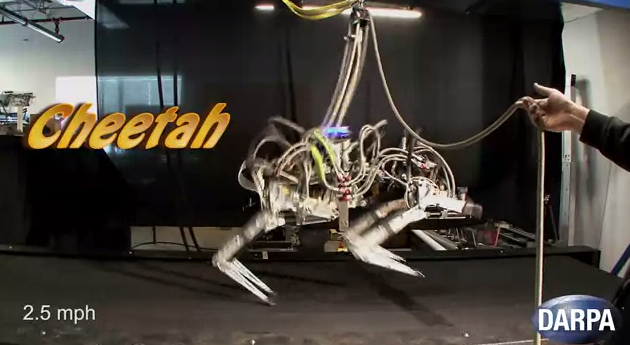 Wow, this Cheetah Robot video is really cool!  I think the way it moves so fluidly makes it amazing, but what’s even more amazing is the fact that it runs 18 mph, settin ga new record for legged robots.  The previous record was 13.1 mph, set in 1989.

The robot’s movements are patterned after those of fast-running animals in nature. The robot increases its stride and running speed by flexing and un-flexing its back on each step, much as an actual cheetah does.

The current version of the Cheetah robot runs on a laboratory treadmill where it is powered by an off-board hydraulic pump, and uses a boom-like device to keep it running in the center of the treadmill. Testing of a free-running prototype is planned for later this year.

While the M3 program conducts basic research and is not focused on specific military missions, the technology it aims to develop could have a wide range of potential military applications.

The DARPA M3 performer for Cheetah is Boston Dynamics of Waltham, Mass. Read more about DARPA’s M3 program at .