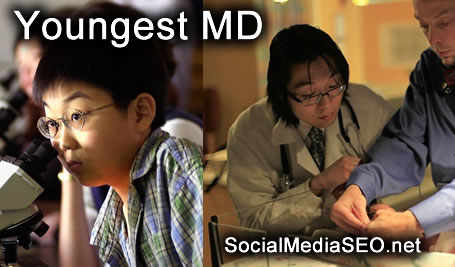 Sho Yano, the youngest M.D. in University of Chicago’s history, is set to graduate with his doctorate under the age of 21.  He’s barely old enough to grab a beer, but he was smart enough to grab his youngest M.D. honor from  Pritzker School of Medicine where he also achieved a Ph.D. in molecular genetics and cell biology. No big deal, right?

Sho Yano started very early, at the age of two he began reading and was bored in standard elementary school.  He got started on college at the age of nine!

Dr. Joel Scwab is a professor of pediatrics who was on the admissions committee when Yano got into medical school, and he recalls the then-child he met:

“I remember interviewing him… this nice, polite, 11-year-old boy, dressed in a little suit. He was never going to be among typical 11-year-olds, where his mother would drive him to Little League. He was going to be a doctor.”