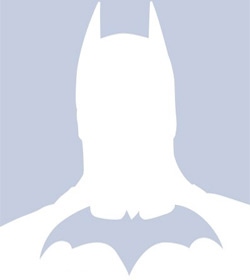 James Holmes, 24 was recently identified as the Colorado Theater Shooter.  I searched around looking for some more information on him but couldn’t find any.  I did however find this one ridiculous post made claiming they found James Holmes Facebook Page.

This is completely out of line to me since there could be many James Holmes on Facebook.  The website, “Right Wing News“, posted a link to a Facebook page that may not have even been the shooters profile!  That was a big mistake, readers started posting comments about how absurd it was to post a random persons Facebook Page without knowing if it was his or not.  Read some of the angry comments below, some saying he may even get sued!  We’ll post his FB profile if it becomes known and public. 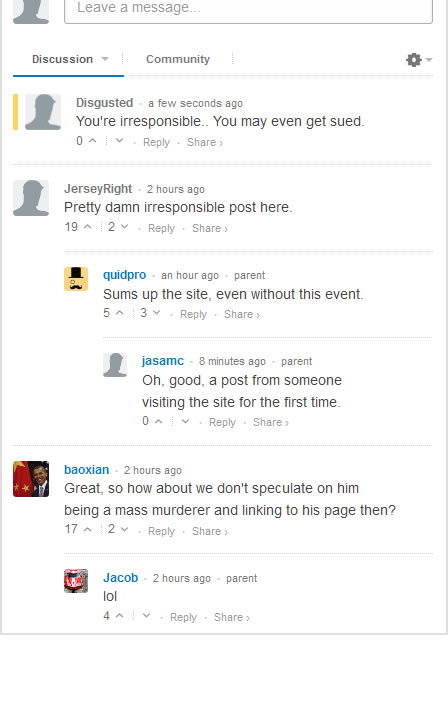 Update (7-24-12):  It seems there are a bunch of sick people out there who are attempting to tribute John Holmes on Facebook.  I’m not sure if this is some kind of a sick joke or the people who made these pages are just sick in the head.  Either way, it’s sick.  The Facebook page shows 635 likes.  I’m wondering if those are people who liked it because they were furious and wanted to confront the Facebook owner or they are joining the idiotic cause.  I hope the latter is not the case here. 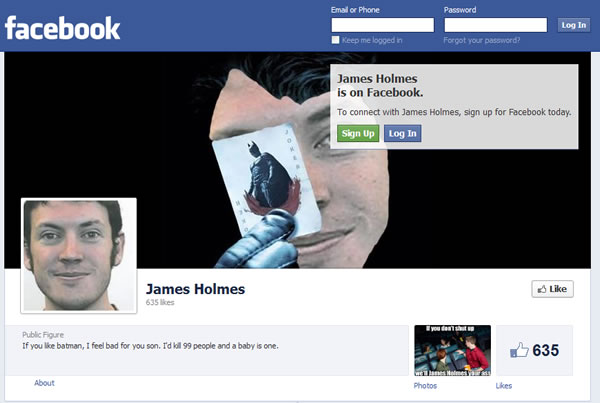 Here are a few posts that are on the Facebook page: 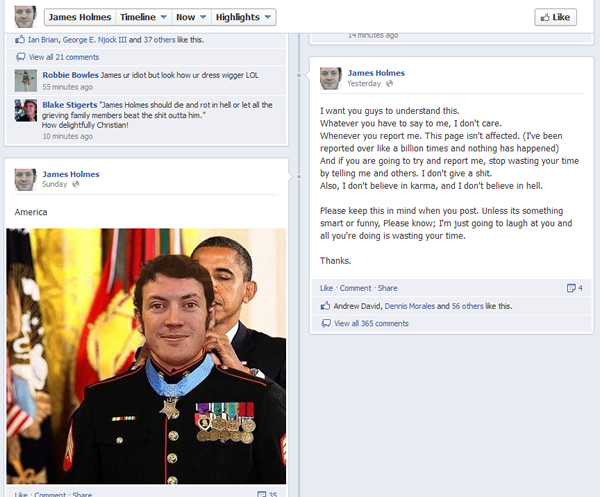 Here’s what the owner of the page says:

I want you guys to understand this.
Whatever you have to say to me, I don’t care.
Whenever you report me. This page isn’t affected. (I’ve been reported over like a billion times and nothing has happened)
And if you are going to try and report me, stop wasting your time by telling me and others. I don’t give a shit.
Also, I don’t believe in karma, and I don’t believe in hell.

Please keep this in mind when you post. Unless its something smart or funny, Please know; I’m just going to laugh at you and all you’re doing is wasting your time.

What do you think about this? Why doesn’t Facebook shut this down?