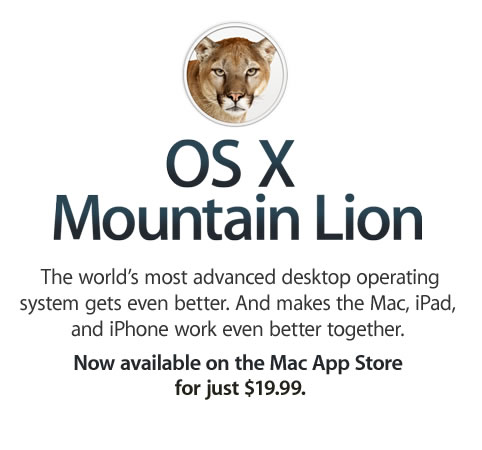 The software will set users back $19.99 via the App Store. Those who bought the operating system at any point on or after June 11 will be eligible for a free upgrade to the operating system. Apple will also be bundling it in current Mac purchases from this point forward.

At the moment the code redemption problem seems like the biggest problem.  We will keep our eyes open to any new bugs that happen.  If you are experiencing errors try the following and let us know in the comments section so we can bring this to everyone’s attention!

Are you having Mountain Lion Errors?

When I tried installing the new OS X Lion, I received a lot of problems on my mac, as did many other users.  The big problem, I know was the hardware compatibility with the software.  I diagnosed this along with Apple, even though they never wanted to admit it was a problem with compatibility.  One of my friends had a brand new Macbook and they replaced the graphics card after finding that was causing the issue.  I’m assuming this had something to do with mine since it was very sluggish, froze at times, had start up errors, took forever to start, and disk repair couldn’t repair it.  After all diagnosis my Lion ended up crashing my hard drive because I had to do hard shut downs since it wouldn’t let me shut down normally!   I’ll let you know the issues I was having below so if you are having them with Mountain Lion, you can decide if you want to revert back or not.  By the way, I had to revert back to Snow Leopard and since then I haven’t had a problem.

All of these steps below are what I did to fix the problem with my OX X Lion, however I’m positive this is same routine for diagnosing OS X Mountain Lion problems, so if you are having trouble, you may want to try the following.

These problems all rendered my computer so it was unusable, so I looked up a bunch of fixes, many which may work for you since a lot of the upgrade errors are probably just disk errors or something stuck in the PRAM.

Hopefully one of these steps will make your new OS X Mountain Lion run fast, like the name suggests.  If anyone has a problem or solution, please list it in our comments section, we would be happy to hear from you.