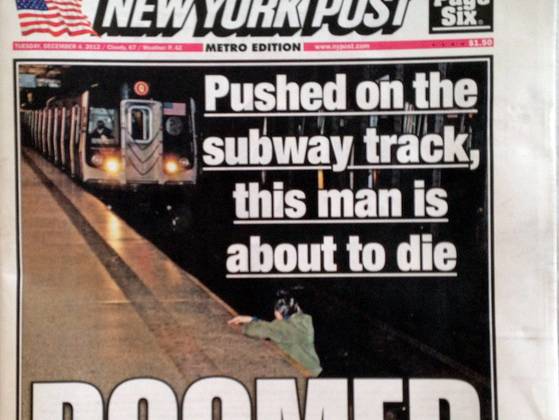 A man was arrested for pushing a man onto the tracks of an oncoming train in New York City.  He pushed the man and watched from the platform, making no effort to help him up, as the man was hit by an oncoming train.

“He wouldn’t leave me alone, so I pushed him,” Naeem Davis told investigators, according to the sources. “I saw him get hit by the train.

There’s so much controversy to this story regarding what Naeem Davis did and also something else that happened during the whole incident.  A New York Times photographer took a picture of the man being hit by the subway train as it was happening.  The picture was then published on the front page of the Post showing Han with his head turned towards the train, reaching up to try to get off the track.

Han, 58, of Queens, died shortly after being struck. Police said he tried to climb a few feet to safety but got trapped between the train and the platform’s edge. It was shot by freelance photographer R. Umar Abbasi, who was waiting to catch a train as the situation unfolded. Abbasi said, “I wanted to help the man, but I couldn’t figure out how to help,” Abbasi said. “It all happened so fast.”

This brings a huge moral debate to everyone.  Why didn’t he help?  Was the picture that important?  Could he not put his camera down and at least run to try and save the man?