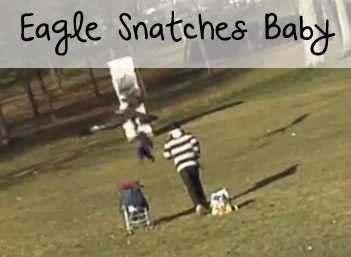 The latest viral video shows a baby getting picked up by an eagle caught on video.  The eagle seems to be coasting then out of nowhere glides in to snatch the baby while it’s sitting next to his mother.  This video has stirred up a lot of controversy with many saying it was a hoax, that the video was done in CGI and the eagle carrying the baby is fake.  After browsing some articles I found a blog post on the Montreal animation school Centre NAD website claims that the video was a hoax created by their students. The post states:

The “Golden Eagle Snatches Kid” video, uploaded to YouTube on the evening of December 18, was made by Normand Archambault, Loïc Mireault and Félix Marquis-Poulin, students at Centre NAD, in the production simulation workshop class of the Bachelors degree in 3D Animation and Digital Design.

The video shows a royal eagle snatching a young kid while he plays under the watch of his dad. The eagle then drops the kid a few feet away. Both the eagle and the kid were created in 3D animation and integrated in to the film afterwards.

The video has already received more than 1,200,000 views on YouTube and has been mentioned by dozens of media in Canada and abroad.

The production simulation workshop class, offered in fifth semester, aims to produce creative projects according to industry production and quality standards while developing team work skills. Hoaxes produced in this class have already garnered attention, amongst others a video of a penguin having escaped the Montreal Biodôme.