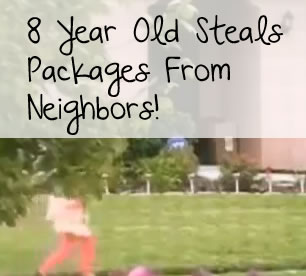 Neighbors in a Florida suburb outside of Orlando were dumbfounded when several packages went missing. The neighbors decided to find out who was stealing by setting up hidden cameras.  What they caught on camera shocked them: an 8 year old girl stealing their gifts right on camera.  They had thought it may be a young child stealing gifts from doorsteps because it seemed to happen around the time children got let out of school.
“I was waiting behind the door and I had my camera ready, and I was, like, ‘Oh, my God'” … the neighbor was walking my way, and I was like, ‘The little girl, she’s over there. She stole it,'” Thalia told Central Flordia News 13.

Police have not charged the girl and revealed they planned on presenting the case to the juvenile division of the Florida state Attorney’s Office to see what should be done given the age of the girl. The neighbors are still waiting to hear from the girl or the girl’s parents.

“We want something done, in the form of the parents stepping up to the plate, taking accountability and saying, ‘We’re sorry this happened to you and the other neighbors,’ maybe even having the child come over and apologize,” Araujo told Central Flordia news 13.