An unprecedented chorus of complaints and upsurge of fury is yowling around the web after the strange decision from the Mountain View which makes it necessary for the Youtubers to sign in Google+ to comment on any Youtube video. For me, this is utter desperation to balloon up the marketing of a social media outlet which has not got the expected popularity in the masses. Google must be regretting this decision which has flooded the Mountain View’s mail box full of complaints. According to the latest reports, users have started to sign a complaint petition which has already got 112,000 and counting hits. Apart from the general masses, Youtube’s co-founder Jawed Karim also bemoaned this new Google+ powered comments when he posted a comment on his channel after 8 years long silence. His first comment came in 2005 on a video. Jawed’s ferocity on this new Google+ mesh can be weighed from his comment which was: 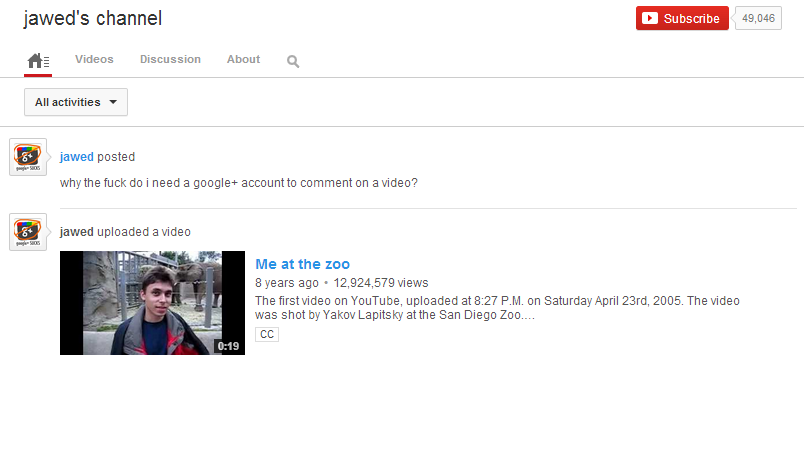 Similarly, musician Emma Blackery also bashed this new feature in a creative way and posted a 3.5 minute video of song which was saying “leave us alone, we just want to make videos”.There were many new nifty updates in the Youtube comments section introduced by Google. The updates started to appear last week but they were announced in September this year by Google. Youtube now promotes the comments you care about, comments of famous celebrities, video creator, people who are in your Google+ circles, a much revamped an improved sorting of comments is also meshed. You can review your comments before posting them and sort the comments at your channel from different metrics.

Despite the co-founder’s yowl around at his channel, some people at Youtube’s desk tried to clarify the new update and calm things down. “If you are like the majority of the Youtubers who have linked their Youtube account with Google+, you can easily comment”, said Product Manager Nundu Janakiram and Principal Engineer Yonatan Zunger, apparently trying to engulf the fury with ice.
Google is generous enough to give you an option whether you want to share the Youtube comments on your Google+ profile or not. The update has not yet changed the mobile version of Youtube and I wish it never does.

This was all because making YouTube into a part of Google’s failed social network had nothing to do with the comments, it was all about falsly boosting g+ numbers up near Twitter level, making Google’s failure appear to be a success.

Google’s “Don’t be evil” motto is only a bad joke now, since Google has lied, destroyed privacy, propagandized rather than admit failure, etc. etc.