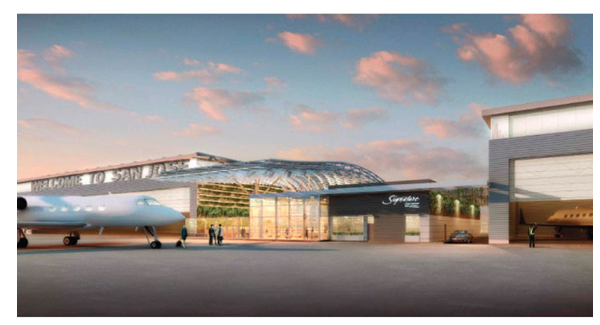 Google is once again making headlines, and this time it’s a private air terminal. Google is ready to start construction in February on a private air terminal and will complete it by late 2015. It is rumored that the facility will have 270, 000 square feet of hangar space and will be able to service air-crafts as large as a Boeing 737. When it is fully completed, 7 terminals will be available and 5 of them are probably going to be dedicated to Google. The terminal will be one of the largest private air facilities worldwide.

Larry Page, Eric Schmidt and Sergey Brin (Google’s founders) are financing this project with their own money. This terminal will be located at Mineta San Jose International Airport and is expected to make $3.5 million for San Jose. The terminal will not be run by Google, but by a fixed-base operator called Signature Flight Support. Gensler is the firm that will build this terminal and it’s famous for building the Denver International Airport as well as the Seoul’s Incheon International Airport, and Los Angeles’s Farmers Field football stadium. Google has taken the top people with them to work on this terminal, it’s not a surprise because everyone expects Google to make the best of whatever they work on.

Google is brand that is famous worldwide, and a private terminal from their name can really attract many private jets. They might even have some of their own air-crafts that they might offer to the people. More details will appear as the project continues. The amount of money invested and the people investing it can tell us one thing; Google is serious about this project. Lately they have been developing ideas that are outside the box. For example, buying a home solutions company, creating a service to buy plane tickets for cheapest prices and now building a private air termi