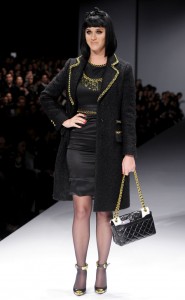 Katy Perry may have been unfashionably late on Thursday when she showed up to the Moschino runway show at Milan Fashion Week an hour late.  The show started at 8 p.m. and she showed up around 9 p.m.  Apparently photographers were annoyed they were waiting for her and booed Perry.  Some said she looked visibly frustrated throughout the rest of the show.

My take is that you don’t know the story of why she was actually late, so is it really that big of a deal?  Plus, she’s a star, if you’re mad because you couldn’t take her picture or had to wait to long, guess what?  Too bad.