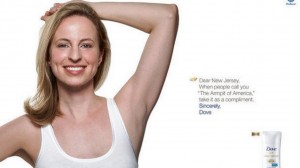 Dove just dropped a billboard in Ne Jersey after planning to run an ad referred to as “The Armpit of America”.  Unilever the brands parent company says they no longer plan to run the billboard intended to help people see armpits in a more positive light.

The text of the ad read, “Dear New Jersey, When people call you ‘The Armpit of America,’ take it as a compliment. Sincerely, Dove.” It featured a smiling woman in a white tank top raising an arm behind her head to expose an armpit.

“We take feedback from our community very seriously and have decided that we will not be running this billboard advertisement,” Unilever said in an emailed statement Tuesday. “We did not wish to cause any misunderstanding and apologize for any offense.”

What do you think, is this Dove armpit ad offensive?