The stage is set for this year’s most anticipated political event – the Mount Paran Christian School Middle School Student Forum. 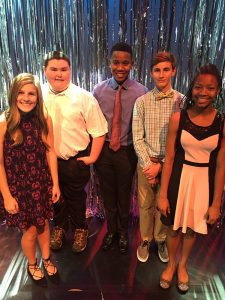 Five candidates will take the stage of the Kristi Lynn Theater Friday, October 14 at 1:45 p.m. as they give their speeches outlining their platform for the middle school student body.

The idea of a middle school student forum began in 1972 when Dr. David Tilley was the assistant principal at Griffin Middle School in Smyrna.

“I have always been a political junkie, and wanted to share the political process with my students,” Tilley said. “The best way was to have the students experience the craziness and energy that defines an American political convention.”

The middle school conventions continued when Dr. Tilley came to Mount Paran Christian School. First it was in the mid-1980s and then again in 2004. The conventions have grown in presentations and excitement from the students each year.

This year five eighth grade students have thrown their hat in the ring to run for president. Raphael Parent, Zachary Fors, Sydnee Brothers, Noah Roberts, and Caroline Roberts have each appointed a campaign manager as well.

Every year the convention opened with a prayer from the outgoing president. Anton Oswald, who served as president last year, will open this year’s convention.

When asked about his greatest accomplishment this past year as president, Oswald responded without hesitation.

“Uniting the student body of our middle school in fellowship, was something that needed to be accomplished,” he said. “We had been divided for too long by grade affiliation. Now we identify ourselves as middle schoolers united!”

The roll call of states comes next. Middle school students -grades six through eighth- are divided into “states” a few weeks in advance and allowed to name their states. 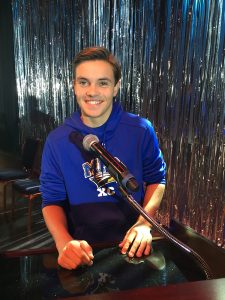 These names range from State of Confusion, to State of Hippies, State of Commercials, State of Disney, and more. They dress like their state and campaign for the candidate of their choice. The demonstrations on the convention floor can be very high charged.

The candidates speak and then the first votes are cast. Sometimes it takes several rounds of voting to reach a final decision. But the decision is eventually reached and a new president is elected.

This is Paul Montaperto’s first year as the middle school’s head at Mount Paran Christian School, and his first student forum. He spoke about what he was looking forward to at this event.

“I’m looking forward to hearing the students demonstrate the voice of their peers in an enthusiastic and positive way, “he said. “It is an opportunity for our students to learn the importance of civility and how to demonstrate love and respect for one another in a political forum.”