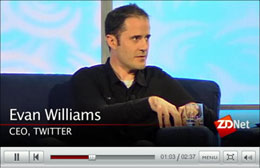 What inspired me most during video clip of Twitter co-founder Evan Williams is not the fact that he turned down a buyout offer from Facebook, but it’s what he said about why he didn’t want to sell Twitter to Facebook:

“… business is the context for doing interesting things.”

Meaning this – Twitter was not created and founded simply because they wanted to build something that can be resold to a larger company.  Evan Williams pointed out “that’s not the point.”

The point is that Twitter was created because of the positive impact it has in the exchange of information in our world – it helps make our world a better place by allowing people to freely share and distribute information.

Here’s the video – and it’s definitely worth a watch: –