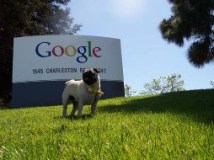 Google has a very solid and consistent mission statement:  “to organize the world’s information and make it universally accessible and useful.”

We see that unfolding in virtually every aspect of where human eyeballs would look to view data.

Here are the 2 most recent examples of Google’s stated mission unfolding in real time:

Google’s Android OS is to mobile phones as Windows is to computers.  It doesn’t matter if you buy a Dell computer, an HP, a Toshiba, or an Acer – they all are running Windows.  Likewise, Android will dominate mobile phones.

Well Google just released their Chrome browser for Macs, and also for Linux.  Although these versions are bit unstable, they are here, and that’s all the matters to Google at the moment.

Now, not only is the Google browser dominating PC’s, but with the entry into the Mac market, there really isn’t any other computer system to go after – they’ve pretty much covered them all.

In my opinion, this is the most relevant path to take since most people simply turn on their computers and head immediately to the web.

There ya’ go – three examples of how Google is aggressively pursuing their stated mission “to organize the world’s information and make it universally accessible and useful.”

Here’s the “Droid Does” video I promised: