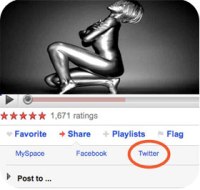 After testing this feature on several videos in YouTube, I find only one problem that should be fixed – the sharing doesn’t shorten the URL of the video.

Here’s a screen capture of what I’m talking about:

Beside the shortened URL issue, I think this is a great new feature for YouTube!