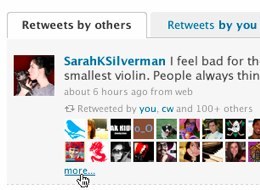 Twitter has begun rolling out their much anticipated retweet feature.

This feature was spelled out in detail in an earlier posting on the Twitter blog.

The retweet feature’s objective is to formalize the retweet practice throughout all users on Twitter.

Basically, they want to clean up Twitter streams so that average users aren’t confused at what they’re looking at, and also make it easier for valuable content to spread faster, and to more users on Twitter.

We’ve just activated a feature called retweet on a very small percentage of accounts in order to see how it works in the wild. Retweet is a button that makes forwarding a particularly interesting tweet to all your followers very easy. In turn, we hope interesting, newsworthy, or even just plain funny information will spread quickly through the network making its way efficiently to the people who want or need to know.