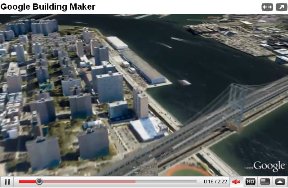 The mission of Building Maker is to “create a three-dimensional model of every built structure on Earth”.

This amazing product from Google allows you to create 3-D versions of buildings, landscapes, and yes… even entire cities.

The strategy to achieve such a monumental task – like building a 3 dimensional view of every building in the world – takes the typical Google approach!  Create a concept, build the platform, then open it up to the world (people like you and me) to start building upon it.

It’s called “open source”, and it is truly one of the reasons Google can achieve unimaginable tasks such as “create a three-dimensional model of every built structure on Earth”.

From the Google Lat Long Blog:

“A few weeks ago, we launched Building Maker, a new way to model buildings in 3D for Google Earth. Since then, we’ve been excited by the community’s enthusiastic response and today, we’re announcing that eight new cities can now be modeled with Building Maker: Brussels, Rotterdam, Cologne, Dortmund, Boston, Los Angeles, Las Vegas, and San Jose.“

You can read the update at Google LatLong: New cities, features added to Building Maker