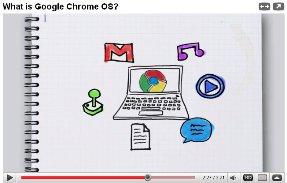 First, let me say that along with the open source announcement, Google stated that Chrome OS “…will be ready for consumers this time next year. Sign up here for updates or if you like building your operating system from source, get involved at chromium.org.”

Google Chrome open source is being released a year ahead of schedule because Google desires to get developers involved early with the project.

Open source has been Google’s bread and butter for product development.

And openning up the Google OS platform to the “public” if you will… is a huge step in not only developing the Chrome OS platform, but also in solidifying the existence and pending release of the operating system

Google Chrome OS is all about the web!

And all I can say is that Microsoft, even with their recent Windows 7 OS launch, has every reason in the world to be scared out of their minds about the Google Chrome OS.

Here’s a great video talking about the Chrome OS: