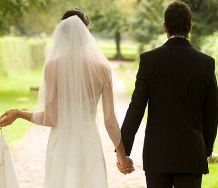 SACRAMENTO, Calif. — Til death do us part? The vow would really hold true in California if a Sacramento Web designer gets his way.  In a movement that seems ripped from the pages of Comedy Central writers, John Marcotte wants to put a measure on the ballot next year to ban divorce in California.

The initiative’s Facebook fans have swelled to more than 1,100. Volunteers that include gay activists and members of a local comedy troupe have signed on to help.