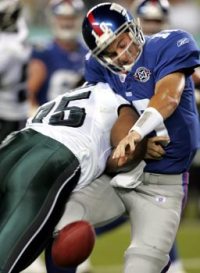 Take the New York Giants vs the Philadelphia Eagles tonight.  The game was amazing to watch, and the Eagles ended up winning.  But looking at the Twitter trending topics list about 20 minutes after the game and one thing stands out – that the Giants are actually ranked higher than the Eagles in the trending list.  The Giants is currently ranked #3 and the Eagles are ranked #6.

This means that the more people are wanting to talk about the Giants losing than they are about the Eagles winning.  And why is that?  I have no idea.  Maybe people are prone to talk more about the negative than the positive.  Or maybe there are more “arm chair quarterbacks” out there that want to share their expertise on how they could’ve beat the Eagles.

What it is, Twitter reveals insights into human mindsets that could never before be extrapolated.  And Twitter can answer questions that quite possible were never even asked before by the media – like what’s the bigger story, the Giants losing or the Eagles winning?