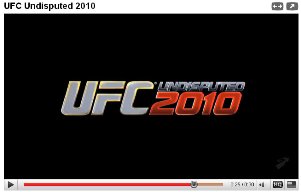 The UFC has made several attempts to release a block buster hit video game, but up until the 2009 release, the reviews have been less then steller.  When UFC 2009 hit the market, the reception was substantially better than the previous versions, however, there were still some skeptics in the crowd.

This time, the UFC plans to do things right by offering a video game that is unlike anything you’ve ever seen before!  You’ll just have to wait until the spring of 2010 to get – speculation is a release date of May 25, 2010.

Here’s the promo for UFC Undisputed 2010