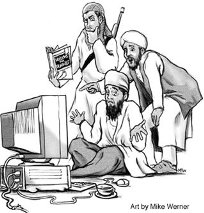 Last night, Twitter got hacked by a group claiming to be called The Iranian Cyber Army.  I wrote earlier about the Twitter getting hacked.  This attack on Twitter raises the new concerns over cyber terrorism – and what could very well be the transition into a new age of terrorism all together.

Sure, nobody lost their lives over this attack (maybe a couple of jobs were lost though in Twitter’s web security department!)  But what the Iranian Cyber Army achieved, in most people’s eyes, is unprecedented – hacking Twitter and actually replacing the site with an entirely different image.

The Dangers of Cyber Terrorism

The issue here with “cyber terrorism”, and with Twitter getting hacked, is that we see the vulnerability of social networking sites.  Twitter has literally hundreds of millions of updates shared every day from people around the world.  And from what we just saw, these updates are clearly “hackable” and accessible to someone who is knowledgeable and determined enough to get to them.

All of the updates on Twitter are already searchable by keywords and other search queries at https://twitter.com/search-home.  But for all the searches that are available publicly, there is an entire world of Twitter that is “private”.  And it’s the Twitter profiles that are set to “private” that are obviously not as private as we may have thought.

There is definitely reason to be concerned over this blatant attack on Twitter.  It shows that even the most robust of websites can be hacked by unknown people, and once a site is hacked, then it’s pretty much a free for all for whoever has the access.

Just be careful what you’re sharing!