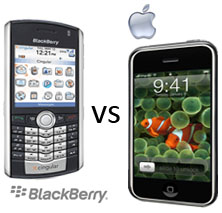 With all the talk and hype around the iPhone these days, you’d think that it is, without question, the #1 mobile being used in the United States!

But that’s not the case.  NetbookBoards.com is reporting hard figures that show the Blackberry is being used by more people in the United States than the iPhone.

Here’s the numbers as reported by NetbookBoards.com:

“The iPhone is the second most-used smartphone in America. Research in Motion’s Blackberry is the most popular, with about 15 million users saying that they use a Blackberry as their primary phone, followed by 9 million Americans saying that the iPhone is their primary phone. Phones with Microsoft’s Windows Mobile are used by about 7.1 million Americans.

These studies are not a measure of sales velocity, accounting instead for the installed base of phone users. The iPhone has been outselling Windows Mobile phones for some time now.”