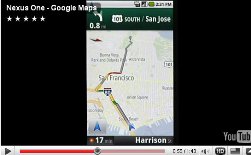 The video tutorials for Google’s Nexus One phone are streaming fast and furious onto the web.  One of the most impressive ones I’ve seen so far is the Google Maps application for the Nexus One.

With rich features such as turn by turn GPS navigation, Google Stree View, layers to show you points of interest along the way, and alternate route suggestions when traffic is heavy, the Google Maps for the Nexus One phone is unprecedented.

Here’s more from the Google LatLong blog along with the featured video:

“The Nexus One also comes standard with a super fast 1GHZ processor, 3.7” high-resolution AMOLED display.   You can also use the Google Maps Navigation (beta) for turn-by-turn guidance and traffic.  And having such a large, clear display makes a world of difference.  Maps are more readable, and satellite and street-level imagery look amazing. And when I pull up to my destination and a large, crisp Street View is shown automatically, I know exactly what to look for.”

See the Nexus One Google Maps video below: