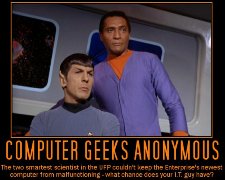 The United States is a super power in a lot of ways – military might, economic power, and capitalism just to name a few.  But one of the ways the US is lacking in super power status is in the geek category!  In fact, the Pentagon thinks it might start threatening our national security.

Wired.com ran a great article about Darpa, the soliciting arm of the The Pentagon.  Darpa is soliciting proposals for initiatives that would attract teens to careers in science, technology, engineering and math (STEM), with an emphasis on computing. According to the Computer Research Association, computer science enrollment dropped 43 percent between 2003 and 2006.

Darpa’s worried that America’s “ability to compete in the increasingly internationalized stage will be hindered without college graduates with the ability to understand and innovate cutting edge technologies in the decades to come…. Finding the right people with increasingly specialized talent is becoming more difficult and will continue to add risk to a wide range of DoD [Department of Defense] systems that include software development.”