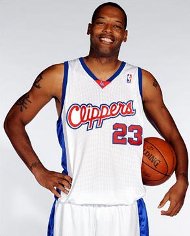 In a trade that seems superficial at first, and nothing more than an exchange of contracts, is actually a long term move for the Trial Blazers in their effort to improve their public image.  The Portland Trail Blazers have a reputation of being called “Jailblazer.”  Something that does not sit well with the owner and management of the Trailblazers.

So in an effort to fix that image, the Los Angeles Clippers and Portland Trail Blazers agreed to a deal that would send Marcus Camby to the Blazers in exchange for Steve Blake and Travis Outlaw.

Marcus is well known among basketball fans as a community-oriented player, as he’s been awarded numerous citations for his good work through multiple foundations.

This seems like a move by the Trailblazers to not only get a great player from Los Angeles, but also set the stage to improve their image with the public and rid themselves of the “Jailblazer” image.

Good Grief! "Jailblazers" is so five years ago!

Geez, Man! Get with the times. They haven't been the Jailblazers for years! Are you on the east coast, or what?

And it was a stupid trade. The Blazers aren't in the position to win the championship this year–there are too many injuries. So for Pritchard to do that was ridiulous. Camby is a quality guy and we'll support him, but he is not worth Travis Outlaw and Steve Blake. And Juwan Howard has been doing a fantastic job for us. I swear he's having the time of his life. Pritchard–that was STUPID, STUPID, STUPID!