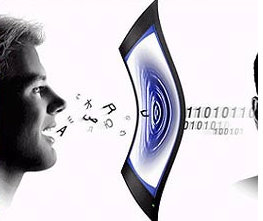 At the World Mobile Congress today, Google’s CEO Eric Schmidt demonstrated a new software being test for Android based devices that would offer instant text translation via your mobile phone.  So no longer do you need to be in another country, or a restaurant where the menu isn’t in English, and struggle to interpret what it says.

With the new Google Android OS text translation, all you have to do is take a photo with your Android phone, and you’ll instantly get a translation into English, or whatever language you desire.

The example that Eric Schmidt used for the text translation was this – “Fruhlingssalat mit Wildkrautern” as “Spring salad with wild herbs.”

A picture was taken of a menu written in German, the image was sent up to the Google servers, and back came an English translation of the text.

There isn’t any definitive timeline as to when this new feature will be available, but knowing Google, it will be sooner rather than later.  As we learned with Google Buzz, the search giant is not afraid to launch a product and let the masses deliver feedback for changes and optimization.