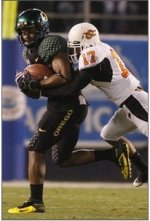 What’s amazing to me is that people still haven’t realized the implications of what you post social media sites such as Facebook and Twitter.  Although you, as an American, have the power of the freedom of speech, you are not, by any means, exempt from the consequences of your actions (including your updates on Facebook and Twitter) – a hard lesson that Jamere Holland is learning today.

Jamere Holland’s Facebook updates have led to his immediate removal from his Oregon Football team for violating team rules.

Here are the series of updates that led to Jamere Holland getting kicked off the Oregon football team:

Jamere Holland: “how the f#ck you kick kinko off the team,,, on some weak sh#t, n#ggas always faded he slipped up but ive been slippn up, and I’m still here, that sh#t weak buff cuh could have done damage for the ducks, that sh#t is weak, weak a$ f#ck, quote me.”

Jamere Holland: “chilln thinking of another status to f#ck with the readers heads, I wish I could block whites as friends and only have blacks LOL, cause apparently I’m misunderstood”

Jamere Holland: for the record I’m not a racist..

This goes to show that people are still clueless about the impact of what you say on Facebook.  As I said above, you can hide under the umbrella of “freedom of speech” to say whatever you want – but you are by no means exempt from the consequences of what you say!