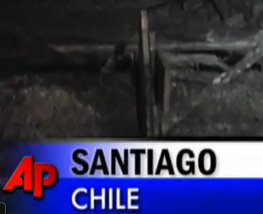 Chile’s President is asking for people to remain calm after the country was rocked with an 8.8 magnitude earthquake.

Chile’s government says dozens of people are confirmed dead in a giant earthquake that has collapsed buildings and set off a tsunami.  The Chile earthquake has also raised threat warnings of a Tsunami throughout the Pacific, including the states of Hawaii, Alaska, and California.