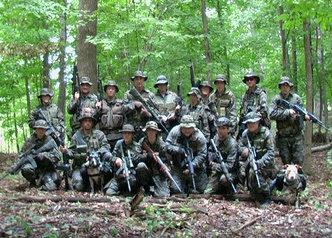 Over the weekend, the FBI’s anti-terrorism department made arrests through three different states in connection with an a group called Hutaree .

Hutaree proclaim themselves to be Christians who are preparing for the end time battles that are discussed in the Bible.  The arrests by the FBI were said to be in order to learn more about the organization.

And here’s an excerpt from the Hutaree “About Us” page on their website:

“As christians we all are a part of the Souls of the Body of Christ, the one true church of Christ. Not any specific man made building or any man controlled organization. This is the belief of the Hutaree soldier, as should the belief of all followers in Christ be.”

“We believe that one day, as prophecy says, there will be an Anti-Christ. All christians must know this and prepare, just as Christ commanded. Luke 22:35-37, And He said to them, “When I sent you without money bag, knapsack, and sandals, did you lack anything?” So they said, “Nothing.” 36, Then he said to them, “But now, he who has a money bag, let him take it, and likewise a knapsack; and he who has no sword, let him sell his garment and buy one. 37, “For I say to you that this which is written must be accomplished in me: ‘And He was numbered with transgressors,’ For the things concerning Me have an end.” This clearly states the reason for the training and preparation of the Hutaree.”