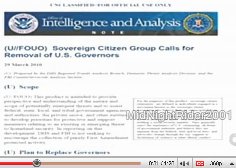 30 Governors, or more, within the United States are receiving threats, some in the forms of letters, from a group calling themselves Guardians of the Free Republics.

FBI Investigators fear the broad call for removing top state officials could inspire others to act out violently.

Subtle threats against dozens of US governors by a Texas-based group called Guardians of the free Republics could be enough to spark violence in a tense and polarized country, the FBI says.

Here’s a news video about The Guardians of the Free Republic:

This week’s threats against at least 30 governors are another example of antigovernment sentiments making waves in the United States in recent months.